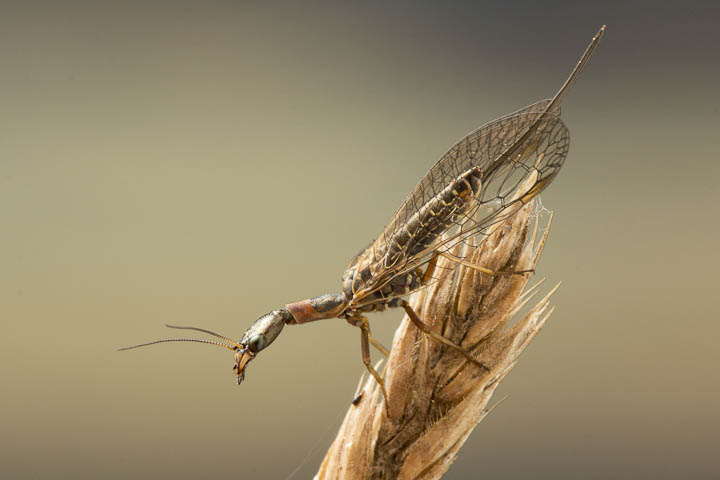 If you are a fan of Canadian neuropteroids, your bucket list should include a trip out west to see one of our best selling points: the Raphidioptera, or snakeflies. The most common of these are in the genus Agulla, and this morning I found several female Agulla when out for a walk at Mt. Tolmie in Victoria.

The way the pronotum curls around the anterior of the elongated thorax like a little jacket is strangely pleasing.

Snakeflies have a fully motile pupal stage, something I found out just the other day, finding this pupa in a decaying branch of Garry Oak.

Here is a freshly-emerged snakefly I found in Oregon a few weeks ago. Note how the wings appear milky and the antennae are not fully hardened.

I had hoped to catch these against a blazing orange dawn, but like so many dawns on the west coast, today was rather cloudy.

Against the mossy bedrock of the Garry Oak meadow, the female snakefly blends in quite well.

One of the most surprising things I have learned about snakeflies over the years is that the larvae have a very effective reverse locomotion that allows them to quickly back away from danger. Check it out:

So if you are ever on the west coast at this time of year, please look for these awesome creatures. You will be glad you did.

Are you feeling lucky today? Is it possible to improve your “luck” in a... Rassemblement de la recherche entomologique canadienne: Septembre 2015 –...
Faire défiler vers le haut