When people hear of endangered species they often think of large and impressive creatures like the Siberian Tiger or Panda Bear, but we often forget about the smaller, yet no less impressive species that need our help as well. The charmingly named Cuckoo Gypsy Bumblebee, or as scientists all it Bombus bohemicus, is a member of the family Apidae, in the order Hymenoptera. Though the Species at Risk Act (SARA) currently has no status for the Cuckoo Gypsy Bumblebee, it has been recognized and listed as endangered by the Committee on the Status of Endangered Wildlife in Canada (COSEWIC). The term “endangered” is a hot topic, but there may be confusion about what it truly means.  As defined by COSEWIC, an endangered species is “a wildlife species facing imminent extirpation or extinction[1]”. In the case of the Cuckoo Gypsy Bumblebee, this means the species is at risk of disappearing from the Canadian wilderness. 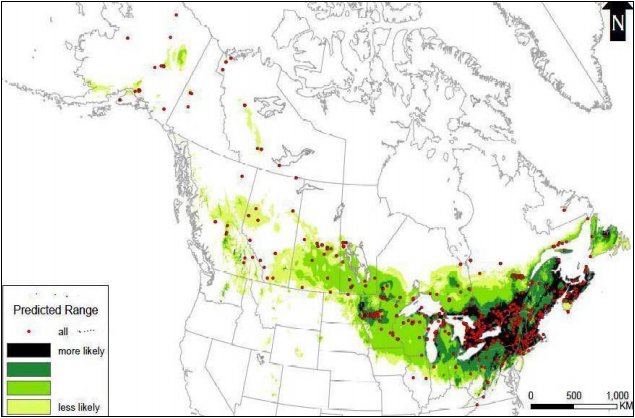 The Cuckoo Gypsy Bumblebee is widely distributed across a wide range in Canada, with individuals found in all provinces and territories except Nunavut[4], though populations are mostly concentrated in southern portions of Ontario and Quebec, and the Maritime provinces. Its decline across Canada has been attributed to a number of factors. It has been shown that a certain host density must be maintained for cuckoo bee parasites to be able to persist in a given area, and the general decline of bees throughout Canada has subsequently damaged Cuckoo Gypsy Bumblebee populations[4]. The mass spraying of crops with pesticides, particularly neonicotinoids, and the release of pathogen-carrying exotic bee species have impacted both cuckoo bees and host densities across Canada[4]. If we want the Cuckoo Gypsy Bumblebee to recover, perhaps the best way is to make Canada a more bee friendly environment as a whole. If we address issues resulting in the decline of other bee species, we can provide the population density necessary to facilitate persistent cuckoo populations. Additionally, addressing factors such as pesticide usage and the introduction of foreign pathogens would have positive effect on Cuckoo Gypsy Bumblebees as this would not only increase the population density of hosts, but also improve survival rates of Cuckoo Gypsy Bumblebees themselves.

The Skillet Clubtail Dragonfly: What you don’t know