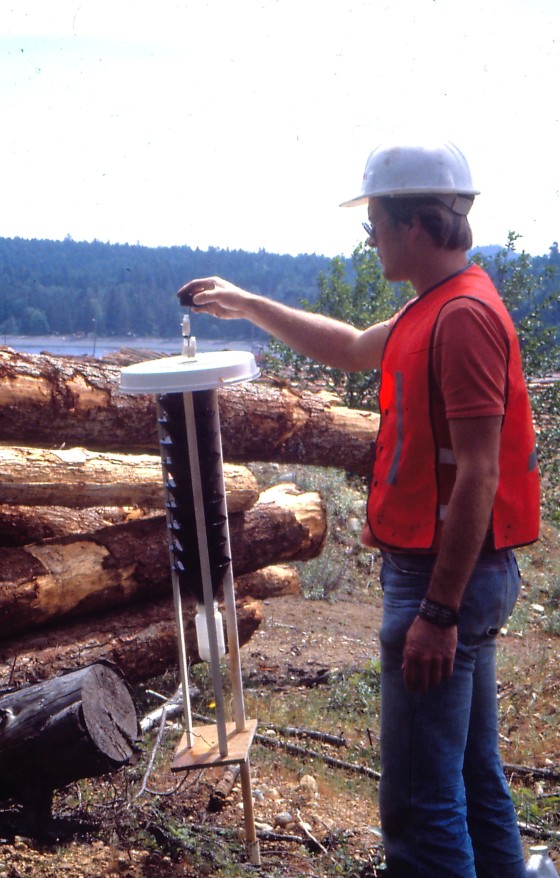 I finished my bachelor’s degree at the University of Uppsala in Sweden in 1975. I had actually completed most of my degree at Umeå University, but because I wanted to take limnology and entomology, I moved to Uppsala for my last semesters, so my degree was granted by that venerable institution. Like many recent graduates, I was now faced with finding my way to a future in biology, and since I was interested in research I wanted to continue as a graduate student. A 2-year detour as a failed doctoral student in medical physiology (I have actually co-authored five publications in endocrinology), a semester as a special-interest student in two courses in forest entomology at what was then the Royal College of Forestry in Stockholm brought me back to essentially the same conundrum. I managed to land some temporary jobs (teaching assistant, which had the perk of leading a student field trip to what was then still the Soviet Union, and stream surveyor using aquatic insects to assess pollution) I applied for entry into the Master of Pest Management (MPM) Program at Simon Fraser University. Why this program? Well, one of my criteria for future employment was that anything I did had to be “useful”, so it had to deal with applied science. To make a long story short, I managed to get through this program, and was recruited by Dr. John Borden for a PhD working on semiochemical-based management of ambrosia beetles. Dr. Borden had quickly pegged me as “bright, but not particularly hard working if not motivated”! I can’t really argue with the latter part of that assessment! Necessity is the mother of invention, they say, and since using sticky traps (the standard research tool when I started) involved hard work, I invented the “multiple-funnel trap”, a story I will save for another blog.

This is where my obsession with “usefulness” started to hurt me, however.  SFU had excellent ecology faculty, and they had a seminar series called “Les Ecologistes” (and they still do). The MPM program also had a seminar series, and unfortunately there was a bit of a rift between the MPM and ecology faculty with each side preferring to stay clear of the other.  Consequently I never went to their seminars, something I deeply regret to this day. I feel that it hurt me because I went through my PhD with blinders on, looking only at outcomes, rather than causes for my successful and failed experiments. 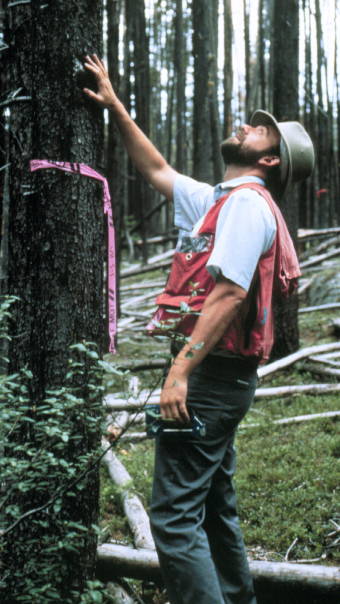 Skip forward to well into my 10-year stint as Research Director at Phero Tech, Inc., a spinoff company that was in part based on my PhD work, including a commercial version of what was now called “the Lindgren trap”. I was working on the application of verbenone, an oxidation product of a major monoterpene of many conifers, α-pinene via trans-verbenol, the principal aggregation pheromone of the mountain pine beetle Hunt et al 1989). Verbenone had been known for some time through research in the United States, but I wanted to see if we could use our release technology to make it applicable for mountain pine beetle management (Lindgren et al 1989, Safranyik et al. 1992, Shore et al. 1992, Lindgren and Borden 1993, Miller et al. 1995, Lindgren and Miller 2002a,b). The results were somewhat mixed, however. On the one hand we achieved significant protection of trees, but sometimes there seemed to be no effect at all (Amman and Lindgren 1995). It appeared as if the beetles responded, but if they attempted an attack, they then ignored the verbenone. At high densities, verbenone appeared to have no significant effect at all.

As I thought about this, I gradually came to the realization that I had no idea whatsoever of the mechanism of “anti-aggregation”. In the literature, verbenone had been billed as an anti-aggregation or spacing (epideictic) pheromone. Research by David Hunt revealed that verbenone was produced by microorganisms, so that if bacterial symbionts were knocked out, the beetles could not produce verbenone. Furthermore, it appeared that many species responded negatively to verbenone. This made me think that it was less of an anti-aggregation pheromone and more a tissue degradation kairomone, which would explain some of our failures, and necessitate a different approach to application. Other more capable researchers picked up the mantle and the use of verbenone is still being investigated.

It was about this time that I was fortunate enough to land my current position at UNBC, and with many new avenues of (curiosity-driven) research available to me, I eventually abandoned verbenone and semiochemical –based management research. I felt that mountain pine beetle had taught me a lesson, and in the words of Bart Simpson “…I never give up before trying at least one easy thing”.

What is the morale of all this? To me it is an example that shows that we must strive to not let existing paradigms blind us to the opportunities. My experience in science is that paradigm-shifts, even at the small scale that I would be capable of, are often slowed down because you cannot get funded to try something that goes against existing wisdom. One of my lasting memories from my undergraduate years in Sweden was listening to a Nobel Laureate (whose name has long since faded away) in brain research from UC Berkeley (if I recall correctly). He said that he would essentially state as fact something that would go against common knowledge, because he knew that it would generate lots of research to prove him wrong. He didn’t care if he was right or wrong, he just wanted to know the answer! I was never such a maverick, but I think some of the most successful scientists are. In the end, my zealousness for being “useful” made me less able to be just that. Don’t let that happen to you!

Hunt, D.W.A., J.H. Borden, B.S. Lindgren, and G. Gries.  1989.  The role of autoxidation of  α-pinene in the production of pheromones of Dendroctonus ponderosae (Coleoptera:Scolytidae).  Canadian Journal of Forest Research  19:1275-1282.

Lindgren, B.S. and J.H. Borden. 1993. Displacement and aggregation of mountain pine beetles, Dendroctonus ponderosae (Coleoptera: Scolytidae), in response to their antiaggregation and aggregation pheromones. Can. J. For. Res. 23: 286-290.

We stand on the shoulders of giants: Reflections by a midget