As a graduate student, publishing a paper is a big deal.  After spending countless hours doing the research, slogging through the writing process, soliciting comments from co-authors, formatting the paper to meet journal guidelines, and dealing with reviewer comments, it’s nice to finally get that acceptance letter and know that your work is getting out there. The ESC Student Affairs Committee is happy to be posting a third roundup of papers authored by Canadian graduate students. Stay tuned to the ESC blog for some full length guest posts from some of the students below in the coming weeks!

Here’s what some entomology grad students in Canada have been up to recently (Articles published online in March and April, 2015):

All species are variable and are constantly evolving but we simply do not know how ecologically important this is. Nash Turley and colleagues at the University of Toronto Mississauga showed that genetic variation and evolution over the course of a month in a rapidly reproducing insect herbivore (green peach aphid) plays large roles in shaping the growth of plants they feed on. This suggests that genetic and ongoing evolutionary processes are important to consider when trying to understand the ecological effects of interactions among species. Article link

Many of the 5,000+ bark beetle species produce acoustic signals to communicate with the opposite sex, but the question that has never before been answered is, what are they trying to say? Amanda Lindeman and Jayne Yack (Carleton University) determined that these signals likely communicate the signaller’s fitness and are the proverbial password that encourages a female to step aside and grant a male admittance to her gallery. Article link 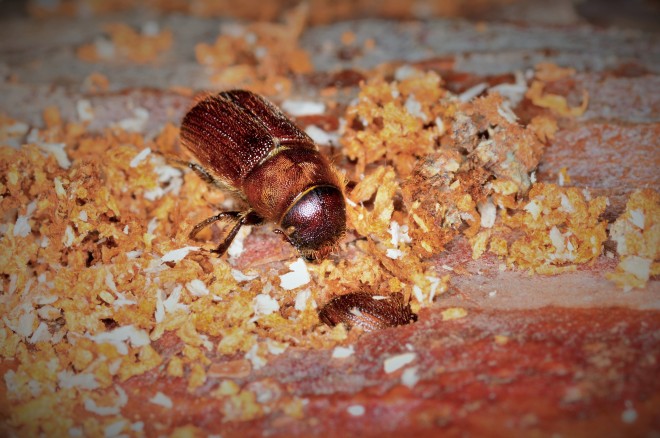 A male red turpentine beetle at the entrance to a female’s gallery. Female is visible blocking the gallery entrance (photo provided by Amanda Lindeman).

‘Bee hotels’ are nesting habitat analogues of cavity-nesting bees and wasps. These devices are great research and monitoring tools, but more recently, concern for declining bee populations has led to their commercialization and conveyance as a means to ‘save the bees’ and house native pollinators. In a study conducted by Scott MacIvor (University of Toronto), 600 bee hotels were used to sample populations and found that 50% of colonizers were wasps and another 25% were exotic bees. Further, native bees were parasitized significantly more often than exotic bees. Many native bees use bee hotels but communicating the diversity of occupiers is needed to avoid ‘bee-washing’. Article link

A molecular phylogeny of Taeniapterini (Stilt-legged flies, Micropezidae) created by Morgan Jackson and colleagues (University of Guelph) leads to a reclassification of the large genus Taeniaptera and the resurrection two genera. Article link

Thomas Onuferko and colleages (Brock University) found that warmer climate leads to earlier nest initiation and lengthening of the flight season, but not to colony social organisation or queen-worker reproductive skew in a eusocial sweat bee. Article link

Gwylim Blackburn and colleagues at the University of British Columbia investigated the mating strategies of Habronattus americanus jumping spiders by documenting the movements, hunting activity, and social interactions of more than 100 individuals in their natural habitat. Males did not display directly to each other to compete for female mates. Instead, they traveled widely, eating nothing and displaying to every female they met. Females traveled significantly less than males and spent more time hunting. They also appeared picky when choosing mates, rejecting nearly every courting male that they encountered. These findings point to female mate choice as a potentially strong source of selection on male sexual displays. Article link

With no natural enemies in North America, 4-5 generations per year, and early- and late-emerging phenotypes, local swede midge populations can overwhelm established management tactics and cause significant damage to broccoli, cauliflower, and other Brassica crops.  Laboratory experiments by Braden Evans, and his colleagues at the University of Guelph, showed that native (Ontario) strains of the entomopathogenic nematodes Heterorhabditis bacteriophora, Steinernema carpocapsae and Steinernema feltiae,and the entomopathogenic fungus Metarhizium brunneum all infected swede midge larvae, pupae and pre-pupal cocoons and all three nematode species successfully reproduced inside swede midge larval hosts.  Field experiments showed some suppression of adult emergence from the soil, suggesting that entomopathogens may hold some potential as a swede midge management tactic for conventional and organic producers. Article link

Lygus lineolaris is the dominant mirid species in soy, navy, and pinto bean fields in Manitoba, reports Tharshi Nagalingam at the University of Manitoba. Article link

Genes encoding the peritrophic matrix of Mamestra configurata (Lepidoptera: Noctuidae) were expressed in the midgut of feeding larvae and the results were used to update a model on the lepidopteran peritriphic membrane. This work was conducted in part by Umut Toprak at the University of Saskatchewan. Article link

Christina Hodson, Phineas Hamilton and colleagues (University of Victoria) co-authored a review article by on the major consequences of uniparental transmission of mitochondria, and an unusual case of extreme sex ratio distortion in a booklouse. Article link

Two genes from the mitochondria genome have potential as genetic markers for examining the population genetics and phylogeography of black legged ticks reports Chantal Krakowetz and colleagues at the University of Saskatchewan. Article link

Harvir Hans and Asad Lone (McMaster Unviersity) found hormetic agents like metformin may derive significant trade-offs with life extension in crickets, whereas health and longevity benefits may be obtained with less cost by agents like aspirin that regulate geroprotective pathways. Article link

Work conducted by Litza Coello Alvarado and colleagues from the Sinclair lab at Western, found that increased tolerance of chilling is associated with improved maintenance of ion and water homeostasis in the cold for Gryllus crickets. Article ink

We are continuing to help publicize graduate student publications to the wider entomological community through our Research Roundup.  Find the first two editions here and here. If you published an article recently and would like it featured, e-mail us at entsoccan.students@gmail.com.  You can also send us photos and short descriptions of your research, to appear in a later edition of the research roundup.

From inquiring students to published authors: an adventure in the Arctic

The flight of the backswimmer: dispersal behaviour in a freshwater insect

Finding a rare robber fly in the Okanagan
Scroll to top