The Romanian tarantula, Lycosa singoriensis (Lexmann 1770), is actually not a tarantula at all!  It’s a wolf spider! In Romania, and in most parts of Europe, the members of the family Lycosidae are commonly called tarantulas. This species is the largest spider in Romania.

For the last couple weeks my family and I have been visiting relatives in Romania.  While we’ve been here, my son (Tavi) and I have made it our mission to capture the Romanian Tarantula. It all started when we were visiting the Celic-Dere Monastery (black water in Turkish) in northern Dobrogea (or Dobrudja), Romania and found numerous large holes in the ground surrounded by a “spidery” silk. The holes were about the size of a Toonie (about 1 inch in diameter) and approximately 30 cm deep (measured with a stick). So, we just had to investigate. After talking with the locals, it was explained to us that the best way to capture one of these spiders was to “fish” for it.  More specifically, we needed to use a skinny candlestick with the wax removed down to the last centimeter.  (So, basically 1 cm of wax and the end of a string.)  We immediately set out for our “fishing” trip…

Unfortunately, we had no success. After further questioning the local people, it was suggested we smoke it out… and still no success.  (One of those “it seemed like a good idea at the time” plans.)  Finally, plan C, to simply dig it out. And… success at last! The Romanian “tarantula” is found in central and eastern Europe.  In Romania the species appear to be quite common but are classified as critically endangered in the Czech Republic and on the current IUCN Red List other parts of Europe (Frank 2000). The spider spends most of its time in the gallery it digs in the ground.  The adult spiders are nocturnal and hunt mainly for insects but have been known to eat small lizards (locals, personal communication).

The species size and lifespan various according to their sex, males are smaller (approximately 19-25 mm) living one year and the females larger (approximately 25-30 mm) but live for two years (Iosob 2009). The spiders have an oval shaped cephalothorax and abdomen that are a brown and black on the dorsal side. Their ventral side is black. In late summer and early fall males court the females by performing a nuptial dance just outside the gallery entrance. When the male approaches the female he begins to swagger, his leg hair lifts and descends alternately while vibrating (Prisecaru et al. 2010). The nuptial dance varies in time but copulation takes place for up to 1-2 hours (Prisecaru et al. 2010). Shortly after mating the male dies, leaving only juveniles and females to overwinter.

As is common in the spring, we caught an adult female with an egg sac, and as Tavi pointed out, “she is a very good Mama!”  When we first dug her out of the ground she was separated from her egg sac, but when we put them together in a jar, she attached herself to them immediately. It has been reported that if the female loses her egg sac she will look for it with perseverance and even accept another spiders egg sac or a sham (Iosob 2009). Once the eggs hatch, females protect their spiderlings by carrying them on her abdomen and cephalothorax (about 4 days) until they deplete their vitelline reserves and complete their first moult (Prisecaru et al. 2010).

The name tarantula is derived from a common wolf spider (genus Lycosa) from Apulia, Italy.  The folklore during the 11th century suggests that a person bit by the “tarantula” will undergo a hysterical behavior, called tarantism; that appears like violent convulsions.  The only prescribed cure for tarantism was frenzied dancing; now known as the traditional Tarantella.

Romania has without a doubt, some of the last untouched and preserved ecosystems among the European Union countries.  (In fact, taxonomists can hardly keep up with identifying new species [Cogãlniceanu 2007].)While in most parts of Europe many plant and animal species are threatened or endangered, they can be found thriving in Romania (species like bears, wolves, tortoises, cormorants)… at least for now.  It is crucial that we learn more about these species while they are still common (including the Romanian tarantula), and help them remain common in the face of growing threats such as economic development, overexplotation, or poaching.  (You can read about current research and conservation work here and here.)

Tavi and I enjoyed exploring Romania, especially capturing and learning about the Romanian tarantula! We suggest you go and, as Tavi likes to say, “find the Mania in Romania!” 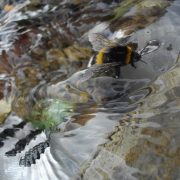 Happiness is a freshly-moulted Phidippus
2 replies

Happiness is a freshly-moulted Phidippus