One of the fringe benefits of running the ESC/ESAB JAM 2012 photo competition was getting a glimpse into what other people where interested in. One of the most unusual images we received was submitted by Marilyn Light, entitled “Trialeurodes sp.”.

The photomicrograph (a focus-stacked image, produced with Zerene Stacker) shows a fourth stage whitefly pupa case. Whitefly are hemipteran herbivores that are often found feeding on the underside of leaves.The species we know most about is the greenhouse whitefly (Trialeurodes vaporariorum), a pest that damages food crops by feeding on them and by spreading viruses. To control whitefly, growers resort to using the wasp Encarsia formosa. In this photograph we see a species of whitefly that was found on a wild orchid, the showy lady’s slipper (Cypripedium reginae Walter). The glassy spines are typical of some whitefly pupa, but what is amazing about this picture is that the creature inside is not a whitefly. Looking closer at the lower left of the image you can see the brownish-orange eyes of the head of a parasitoid wasp, with the thorax and abdomen almost filling the case. Marilyn has included the following information with the image:

The showy lady’s slipper orchid, Cypripedium reginae Walter, forms large colonies in fen wetlands. The insect herbivore assemblage of this orchid includes Trialeurodes sp. Cockerell (Hemiptera: Sternorrhyncha: Aleyrodidae) which was first observed by us in 2009 on orchids growing in stressed habitat. Eric Maw, CNC, determined this whitefly to be an undescribed Trialeurodes. Subsequently, we have found isolated infestations in a second orchid population which is less subject to drought stress. The whitefly is parasitized by Encarsia sp. Förster (Hymenoptera: Chalcidoidea: Aphelinidae). During microscopic examination of one 4 th stage nymph (pupa) case that had been removed from a freshly collected orchid leaf on September 22, 2012, I photographed a parasitoid that was soon to emerge. About half of the other cases examined had been parasitized.

Of course, being who I am, I was curious not only about the image, but also about the person who took it. I asked Marilyn to tell me a bit about herself and how the image came to be…

“I am a member of the ESC but do not earn my living through entomology. I am retired from the University of Ottawa Professional Training Service.

My interest in insect population dynamics begins with my experience in 1948-49 during an eastern tent caterpillar outbreak in Montreal: I was 7 years old. My dad showed me the the stages and how to distinguish male and female moths. My first teaching opportunity was with my Grade 2 classmates on the insect and its life history. Ever since I have been learning so I can teach others. In 1951, after the outbreak was subsiding, I observed a large caterpillar walking alone on a twig. It burst when touched, exuding pink fluid. I was to later learn that it had been infected with a virus. I remain fascinated by the delicate balance in nature, between plants and herbivores, and between herbivores, their pests and diseases.

My husband and I have been tracking wild orchid populations since 1985, examining how they are impacted by climatic variables, disturbance, pollinator behaviour, and insect herbivores. The dynamic of insect herbivore populations with their respective biological controls and the orchids is a natural extension of the work.

There is a paucity of information about insect biology except with species of economic importance or conservation value. Our investigations will hopefully serve to fill this gap. We publish regularly in both peer-reviewed and popular media.”

Professional work by dedicated ‘amateurs’! More of Marilyn’s work can be seen in the study, Potential impact of insect herbivores on orchid conservation. (Light, M. H. S. and MacConaill, M., 2011. European Journal of Environmental Sciences: Vol. 1, No. 2, pp. 115–124) and Possible Consequences of Walking off the Trail (Light, M. H. S., and M. MacConaill, 2008. Orchids: 77: pp 128-133). She is well known in the orchid community in Canada and abroad, and is author of the book, Growing Orchids in the Caribbean (Macmillan Caribbean, 1995). 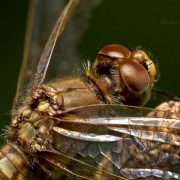 ZAPPED: The Buzz About Mosquitoes
Scroll to top